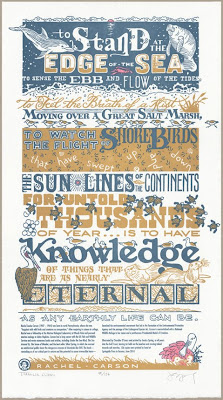 This announcement is so timely given our show in the gallery this month featuring book arts about social, political and environmental issues. Chandler and Jessica are the first artists I’ve seen who have responded to the Gulf oil disaster and this looks like a really incredible broadside. Below is an the info Chandler sent me. Buy this one quick. It will sell out fast!
Take care,
Laura
****************************
From Chandler & Jessica:
Hello, everybody! So far we’re having a cold and wet summer here in the Pacific Northwest, but for our eighth Dead Feminist broadside, our thoughts have turned to the sweltering Gulf Coast.

The newest broadside, entitled “Drill, Baby, Drill,” was created in reaction to the Deepwater Horizon/British Petroleum oil “spill” that began in April, and that to date has poured millions of gallons of oil into the Gulf of Mexico. It’s been hard to remain positive in the face of the disaster, and despite our efforts to create a piece full of hope, some of our anger and dismay has found its way into the design. For an inspiring quote, we’ve turned to the words of writer, scientist and environmentalist Rachel Carson, from Under the Sea-Wind:

“To stand at the edge of the sea, to sense the ebb and flow of the tides, to feel the breath of a mist moving over a great salt marsh, to watch the flight of shore birds that have swept up and down the sun lines of the continents for untold thousands of year … is to have knowledge of things that are as nearly eternal as any earthly life can be.”

“Drill, Baby, Drill” focuses on the wildlife affected by the disaster. A manatee and dolphin play in deep ocean blue, while plovers dash by in a sandy gold that becomes the sickly tea-colored oil pouring from a hidden offshore rig. Baby sea turtles inch their way to the shore; a roseate spoonbill nests in a corner; a brown pelican sits, surveying the scene. How many creatures can you find? For more information and to see the piece, check out the Anagram Press blog here:

“Drill, Baby, Drill” debuted yesterday at the Gig Harbor branch of the Pierce County Library, where we gave a presentation about the series and the process behind it. The broadside is letterpress printed from hand-drawn typography and illustrations, on archival, 100% rag (cotton) paper. Each print is also hand-colored, and individually numbered and signed by both artists.

We are donating a portion of our proceeds to Oceana, an international organization focused on ocean conservation and dedicated to ending offshore drilling.

Colophon reads:
Rachel Louise Carson (1907 – 1964) was born in rural Pennsylvania, where she was “happiest with wild birds and creatures as companions.” After majoring in science in college, Rachel won a fellowship at the Marine Biological Laboratory at Woods Hole and pursued marine zoology at Johns Hopkins. Carson had a long career with the US Fish and Wildlife Service and wrote numerous books and articles, including , The Sea Around Us, The Sense of Wonder, and the best-seller Silent Spring, in which she warned an uninformed public about the dangerous overuse of chemicals like DDT. The book—reminding us of our critical part in nature and the potential to cause irreversible harm—launched the environmental movement that led to the formation of the Environmental Protection Agency and the passage of the Endangered Species Act. Carson is memorialized with a National Wildlife Refuge in her name and a posthumous Presidential Medal of Freedom.

Illustrated by Chandler O’Leary and printed by Jessica Spring, as oil pours into the Gulf Coast, leaving tar balls on the beaches and moving inland towards salt marshes. 136 copies were printed by hand at Springtide Press in Tacoma. June 2010

If you are interested in purchasing a print, you can simply reply to this email (recommended if you’re local and want to avoid Etsy’s shipping charges, or if you prefer to pay by cash or check), or check out the Anagram Press page on Etsy (if you’d rather use a credit card):

A few copies of the previous three prints in the series are also still available, as are reproductions of the first seven broadsides, offset-printed as oversize postcards.

We’re also still taking subscriptions to the Feminist Broadside series. Subscribers commit to purchasing at least one print from each edition for the life of the series; in return, the Subscriber’s Price will remain $30 (plus tax and/or shipping) for the rest of the series—the prints listed on Etsy are the regular price of $35. If you are interested in becoming a subscriber, please reply to this email. A new print is available roughly every two to three months, with the next broadside coming out in late August 2010. For more information on subscribing, visit the F.A.Q.:

The postcard reproductions of the first seven Feminist Broadsides are priced at $1.75 each, and can also be purchased via Etsy or email. Every new subscriber, starting with either “Drill, Baby, Drill” or the three previous prints, will also receive one free set of postcards.

Many thanks, as always, for your continued support and comments!