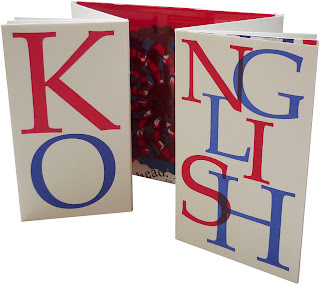 We are thrilled to announce the arrival of Jana Sim’s newest limited edition artist book: Konglish. This book illustrates the differences between how language is observed and interpreted. Sim has focused on Korean, English and Konglish (Korean+English), which is the term used for English words in a Korean context, or words made from a combination of Korean and English as a sublanguage. Sim shares her first hand experience using short, humorous anecdotes based on the differences of the languages and how they function in different cultures. The way Korean appears to English speakers can differ dramatically, as does English to Korean speakers, often leading to funny mistakes and experiences causing misinterpretation or confusion.

When the book is closed, the word KONGLISH appears on the front, combined from the words Korean and English which can be seen in full once the book is opened. Once all the pages are read, two laser cut volvelles appear in the middle of the book. The acetate wheels have mixture of both Korean and English alphabets.

The book will be experienced very differently depending on what language you speak. If you only speak one language, the other will be seen as exotic shapes and patterns. If you understand both languages, you will be able to compare and understand both sides of Sim’s stories.

We would like to extend a warm congratulations to Jana for her recent award of a scholarship to continue her graduate studies from The Claxton Club in Chicago. According to the club, “The entire committee was unanimous in its admiration for your work.” The Caxton Club’s purpose is the literary study and promotion of the arts pertaining to the production of books and we are so thrilled that they have honored Jana’s work.

Jana came to United States from her native Korea in September 2002. After earning her BFA in painting from University of Illinois at Urbana-Champaig, Sim relocated to Chicago and entered MFA book and paper program at Columbia College Chicago. Sim’s works can be divided into two themes where one is the Korean doors which represent the memories of childhood and past, the reminiscence. The other theme is about the difficulties she faces living as an International Student and the cultural differences between Korea and the United States. Sim started exhibitions from 2006 and her book art works are at numerous exhibitions in the US. She has been featured in several shows here at 23 Sandy Gallery and is in our regular inventory as well.