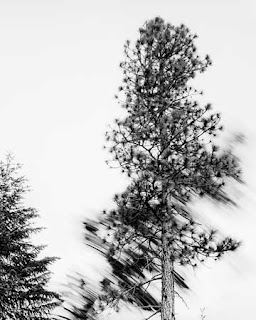 “I have always been drawn to forests, especially what I think of as blue collar forests. While I marvel at the magnificent specimens in our National Parks, they represent a very narrow view of our connection with trees. In the forest I see communities of beings, creating and collaborating in the rich cycle of living and dying.” Falling Trees is an exhibit that was unwittingly born when David Paul Bayles took summer work as a logger to earn money for photography school. Spending the next four years in the Sierra Nevada Mountains, enmeshed in the world of lumberjacks and industrial logging culture was not part of the plan!

Ten years later, Bayles made two trips to Northern California to photograph loggers and sought to answer the question “How could I have been part of cutting down these sentient beings, separating them from their community and in the process grow to love and be inspired by them?” His collection of portraits, oral histories, and photos eulogize the felling of these statuesque trees. In the series, Falling Trees, Bayles has assembled 12 large format black and white images, shot with a 4×5 view camera. Captured is the beauty of the forest along with the grace and power of a tree in motion.

David Paul Bayles has been a photographer for 25 years and has been showing his photographs of trees and forests since 1982. In 2003 Sierra Club Books published Bayles’ first monograph, Urban Forest. His photographs are in collections around the world including the Santa Barbara Museum of Art, the Harry Ransom Center at the University of Texas, Austin, and Bibliotheque Nationale, Paris, not to mention our own Portland Art Museum. He presently resides on Dreaming Forest Farm outside Corvallis, Oregon.

Bayles will present his rescheduled artist lecture on Saturday, April 25, 2009 at 6:00 p.m. The lecture is free and open to the public. Bayles’ stories about his journey from logger to committed environmentalist are fascinating and heartening, and will offer a peek into the dangerous world of rough men and “widow makers” that few ever experience.

A complete online catalog of Bayles’ photographs featured in this show can be found here.