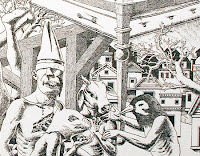 Our congratulations to Eric Stotik for winning this year’s RACC Fellowship, which includes a $20,000 prize. We are very excited by this news as Eric’s work is featured in a fine press book we carry here at 23 Sandy Gallery titled, The Emperor. Published by Charles Seluzicki, this gorgeous book also includes a surreal fable by Charles Simic and hand lettering by Stotik. It’s a beautiful specimen of a finely printed book that we have a hard time keeping on the shelves. Click here to learn more about this intriguing book.
RACC says, “For the past 26 years he has produced gorgeously unique artwork, transcending time and place. With his extraordinary technical ability he creates surreal paintings — skeletons with wings, arms and legs emerging from red smoke, a nude figure hung over a bear skin — compelling images drawn from Stotik’s curious mind. The effect he is aiming for, he has noted, is “insight with a gasp.”
You can learn more about Eric and his award here at the RACC site. Eric is represented by our good friends over at the Laura Russo Gallery. See his paintings here.
Congratulations Eric! 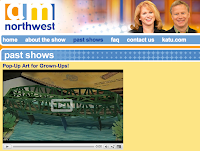 Here’s something exciting. Remember the TV spot featuring our Pop-Up Now exhibition on KATU’s AM Northwest program way back in October? Well, the photographer who shot the segment, Bob Bullock, won an Emmy! He won for “Photographer – Program – Composite.” The composite included four short segments that he produced, shot and edited—one of which was Pop-Up Now. Bob told me, “I’ve reached the pinnacle of my career. The only thing bigger I could ever win is an Oscar or a Pulitzer.”
A big thanks to all of the artists who were featured in this segment and to all of the artists in the show who helped make this show so compelling. Bob discovered us while taking a break from working at KATU’s studios, which just happen to be located just two blocks away from the gallery. During his walk, the amazing books inside the gallery windows caught his eye and the rest is history.
During my Marketing 101 for Book Artists talk I always talk about the value of entering juried shows. Exposure is one of the greatest benefits. This was great exposure for the artists featured plus great exposure for the book arts in general. A whole new audience discovered the book arts with this plus the Oregon Art Beat feature about the same show. Keep entering all the juried shows you can muster—you just might be part of an Emmy winning show.
You can view the “Pop-Up Art for Grown Ups” segment here
And, you can see the online catalog for Pop-Up Now here.
Congratulations Bob!

09 Jul 2011 / 0 Comments / in Blog Postings/by LauraRussell
Uncommon Threads: The Handicrafts in the Book and Paper Arts
One of the best aspects of working in the field of book and paper arts is the chance to work with such varied artistic materials and techniques—even traditional handicraft techniques. Think of knitting, embroidery, sewing, beading, felting, needlework, stitching, quilting and any other myriad possibilities. Combine these techniques or materials with a strong concept, meaningful content, a story to tell or a compelling narrative and we have a new era in the book and paper arts. This exhibit is open to hand crafted book and paper arts related works created as either edition or one-of-a-kind. Artist books, sculptural books, book objects, altered books, zines, broadsides and sculptural pieces are all encouraged.
A couple of updates about the show. First off, work for this show does not have to be for sale. We know how hard it sometimes is to part with your masterpiece.
Also, we have created a new prize for this show: one artist will receive the “Library Choice Award” which will be awarded based on ballots cast by our library and museum customers who will be mailed a print catalog for this show. That artist’s work will be purchased by the gallery and donated to one of the voting libraries.
Entries are already rolling in and I must say this is going to be a terrific show. The submissions so far have very strong concepts, are well designed and very well crafted. We hope you can join us by submitting your own work to this show.
Submissions are due by midnight August 13, 2011
Acomplete call for entries for Uncommon Threads can be found here.

On March 5th 2007, a car bomb was exploded on al-Mutanabbi Street in Baghdad. Al-Mutanabbi Street is in a mixed Shia-Sunni area. More than 30 people were killed and more than 100 were wounded. Al-Mutanabbi Street, the historic centre of Baghdad bookselling, holds bookstores and outdoor bookstalls, cafes, stationery shops, and even tea and tobacco shops. It has been the heart and soul of the Baghdad literary and intellectual community.

The Al-Mutanabbi Street Coalition is issuing a call to book artists to work on a project to “re-assemble” some of the “inventory” of the reading material that was lost in the car bombing of al-Mutanabbi Street.

We are asking book artists to join our project and further enhance the work of the Coalition by honouring al-Mutanabbi Street, by creating work that holds both “memory and future,” exactly what was lost that day.

We ask that you create 3 books for the project, which is also raising funds for Médecins Sans Frontières. The books will tour venues alongside the Al-Mutanabbi Street broadsides from early 2012. A complete set of all the books will be donated to the Iraq National Library. An update on the broadsides tour is at: http://www.bookarts.uwe.ac.uk/mutan11.htm

If you would like to know more, or would like to join this project, please download the PDF for more information which is also on our newspage (http://www.bookarts.uwe.ac.uk/newsdata.htm), and if you have any questions please email
Sarah Bodman: Sarah.Bodman@uwe.ac.uk or Beau Beausoleil:  overlandbooks@earthlink.net
We would love to have you contribute to the project.

We have 167 artists on board, and will keep going with our call until the end of August…
Do join us. Al-Mutanabbi Street Starts Here.